The Russian leader has played statesman since the beginning of the tournament, playing host to presidents and prime ministers.
More than 2.5 million tickets have been allocated to fans from Russia and around the world, showcasing his country as a tourist destination.
And the Russian national team — which went into the tournament as the lowest-ranked side — has performed beyond all expectation.
The World Cup has also raised Putin’s geopolitical profile. In a meeting with the Russian President in Moscow on Wednesday, US national security adviser John Bolton complimented Putin, telling him he was eager to learn “how you handled the World Cup so successfully, among other things.”
That’s more than just a diplomatic nicety. In terms of optics, the World Cup appears poised to close a chapter that began in Sochi for Putin. 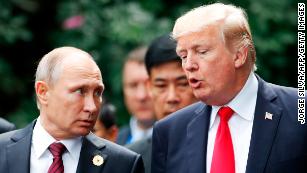 Trump casts doubt on Russian election meddling ahead of Putin summit
Days after the closing ceremony at the 2014 Sochi Winter Olympics, the Russian government launched the annexation of the Crimean peninsula from Ukraine, sparking a major international crisis and crippling economic sanctions against Moscow. The downing of Malaysia Airlines Flight 17 in eastern Ukraine further deepened Russia’s isolation, as did Putin’s military intervention in Syria and the meddling in the 2016 US presidential elections.
The Sochi Olympics also cast a shadow over Russian sport. An independent WADA-commissioned report said the Russians operated a state-sponsored doping program during the Sochi games. As a result, Russia was banned as a nation from the PyeongChang Winter Olympics, although clean Russian athletes were able to compete under the Olympic flag.
Now Putin is presiding over a moment of international Russophilia, at least by appearances. The games have not been marred by fan violence or — knock on wood — by terrorism. Images of fans celebrating on the streets of Moscow and other Russian cities cast the country in a festive light. And on the geopolitical front, the Russian President will crown the World Cup by meeting US President Donald Trump in Helsinki on July 16, the day after the final. 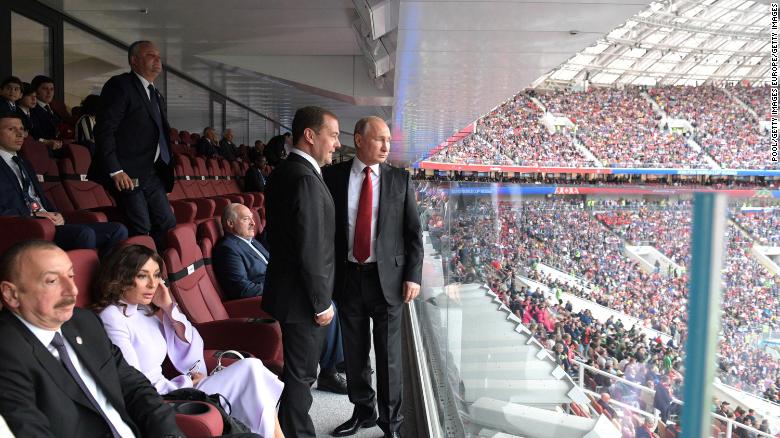 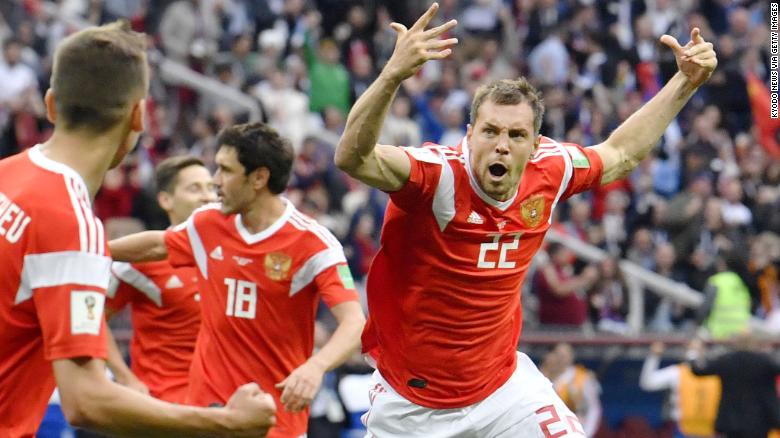 Artem Dzyuba of Russia celebrates after scoring a goal in a match against Saudi Arabia.
As yet, the agenda remains quite general. Questioned by CNN about the topics for a summit with Putin, Bolton added that the “full range of issues between the two countries” would be discussed in the summit, including the annexation of Crimea, a matter that the Kremlin considers closed, despite scant international recognition of the move.
Pressed on the wisdom of a holding a summit when Russia has not changed any of the behavior for which it has been sanctioned, Bolton said:
“The fact is that it’s important for the leaders of those two countries to meet. There are a wide range of issues, despite the differences between us, where both President Trump and President Putin think they may be able to find constructive solutions. I’d like to hear someone say ‘That’s a bad idea.'”
That’s not the only important hint of international goodwill toward Putin. A group of Republican US senators is heading to Russia next week, another high-level visit that happens against the background of the World Cup.
And the World Cup final on July 15 gives Putin another opportunity to play the role of statesman: The Russian leader has invited Israeli Prime Minister Benjamin Netanyahu to attend the match. While Netanyahu has not yet responded to the invitation, Palestinian Authority President Mahmoud Abbas has already confirmed his attendance. 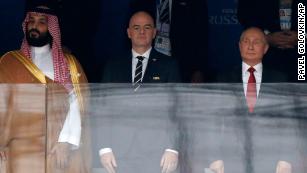 Opinion: World Cup won’t give Putin global power
Like the Trump-Putin summit, it’s hard to say if a possible three-way meeting between Putin, Abbas, and Netanyahu will be long on symbolism and short on substance. Russia remains under sanctions, and US-Russian relations are still extremely frosty. But in terms of photo opportunities, the World Cup has provided a most excellent backdrop.
Russian election meddling is likely to remain front and center in US-Russian relations. The Kremlin has a mirror-image view of the matter — Putin accuses the West of trying to meddle in Russian domestic politics, and denies interfering in foreign elections — and it is hard to imagine Washington and Moscow finding common ground.
Dmitri Trenin, the director of the Carnegie Moscow Center and one of the leading observers of US-Russian relations, suggested the two countries offer up at least some symbolic gesture to give the summit a bit more legitimacy.
“To blunt likely criticism of the coming US-Russia summit it would make sense for the Kremlin and the WH to publicly state that interference with the vote counting mechanisms in either country is inadmissible,” he wrote on Twitter. “Truly, interference makes no sense.”